Visit to the clearing and the Armistice wagon in Compiegne 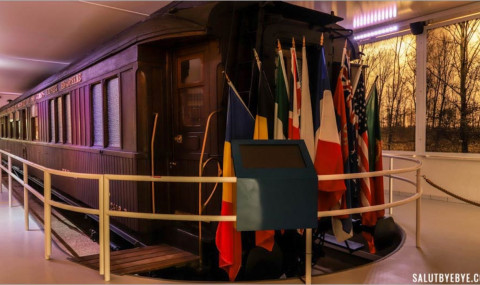 Today, I take you to the heart of the forest of Compiegne in the Hauts-de-France region (not far from Paris), to discover the “clearing of the Armistice”, where the armistice marking the end of the First World War but also that of June 1940 between France and Germany was signed.

It is both a place of remembrance and a museum, where you can see the reconstruction of the armistice wagon where the signing took place. In this article, let’s discover its history, as well as photos and practical information if you want to visit it.

How did Compiegne, a small town in France, come to host these major historical events? We are going to dive back into history while discovering the inside of the Compiegne Armistice Memorial. 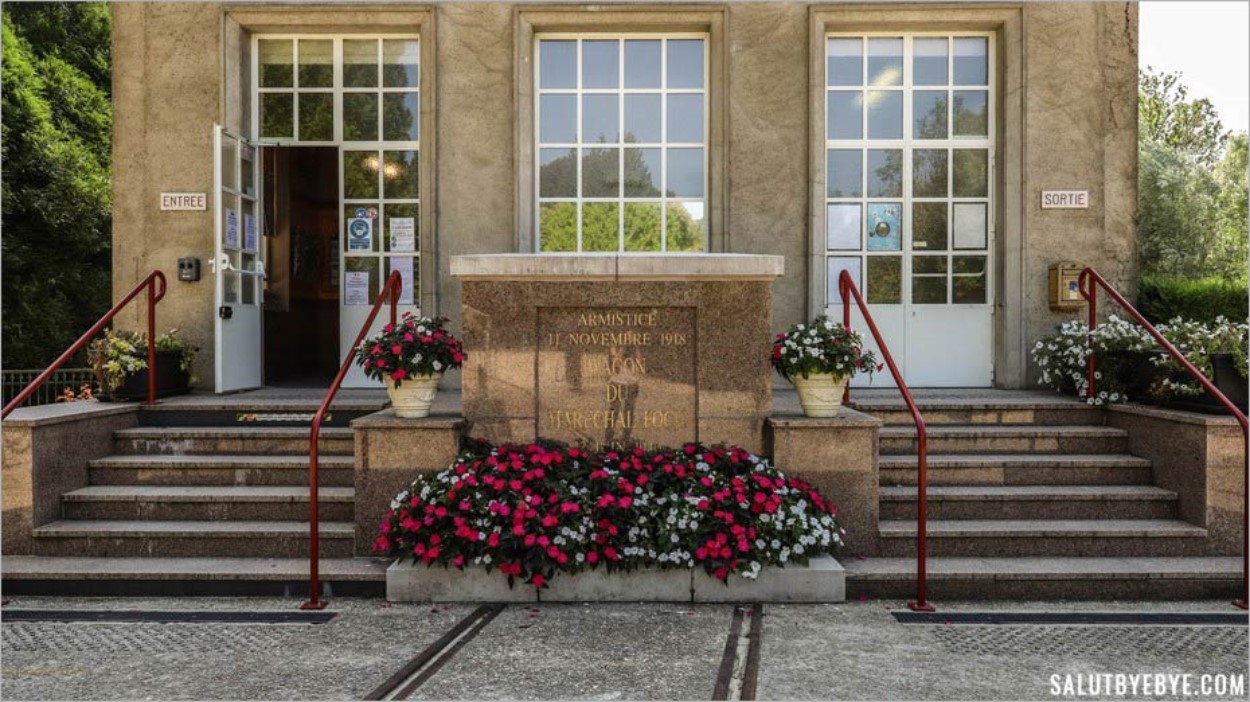 To understand how it came to be, we have to go back to the summer of 1918. After four years of conflict, the First World War was coming to an end, the Germans were on the verge of defeat and it was rumoured that emissaries had just left Germany to come and negotiate an end to the fighting.

Marshal Foch, who commanded the main front of the conflict in France, the Western Front (in northern France, Belgium and the Alsace-Moselle region), felt that a place had to be found to negotiate an armistice.

In 1918, the man had set up his headquarters in Senlis… but very quickly rejected the idea of organising the signing of the armistice there, just as he was opposed to the choice of a symbolic building in or around Paris (for example the Versailles Castle, where the peace treaty between the Allies and Germany would later be signed).

Why? Because he felt that a certain respect should be given to the defeated, and that this historic moment should be preserved from the agitation of the crowds, the press, and anything else that might disrupt the debates… As Senlis had been so badly damaged by the armed conflict, it would probably have been difficult to contain the anger of the inhabitants when they saw the enemy arrive. 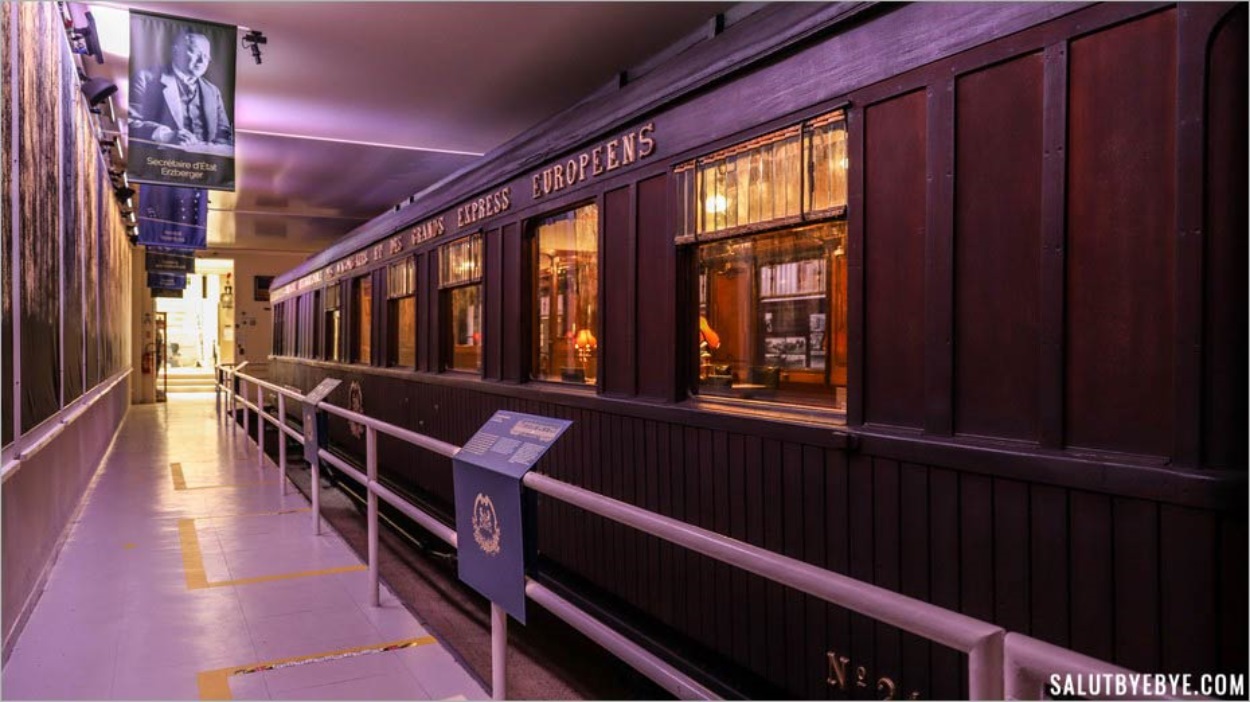 An area in the forest of Compiegne caught his attention among the possibilities offered to him. The place was easily accessible by train (there were already rails connected to the station at Compiegne) while allowing people to get away easily to ‘lose the press’ if the situation was to get out of hand.

Back in time, the Marshal had a special train which he used to visit the troops on front lines. At the time, it was quite common for leading state figures to have trains fitted out with lounge cars, sleeping cars and office cars. This solution therefore seemed optimal.

Two trains were transported to this isolated area in the greatest secrecy: the train for Foch’s staff and a second train for the German delegation. A duckboard path was created between the two so that people could move easily from one to the other. The discussions started on 8 November 1918… No real discussions because in reality, a text was submitted to the Germans, who were given three days to think about it.

The debates were held in an old teak wood dining wagon, ordered in 1913 by the International Sleeping Car Company. It used to run on the Saint-Brieuc and Le Mans lines and then on the line between Paris and Deauville. In September 1918, it was requisitioned for the needs of the war and transformed into a lounge car, joining the Marshal’s train only on 29 October, therefore very shortly before the armistice. 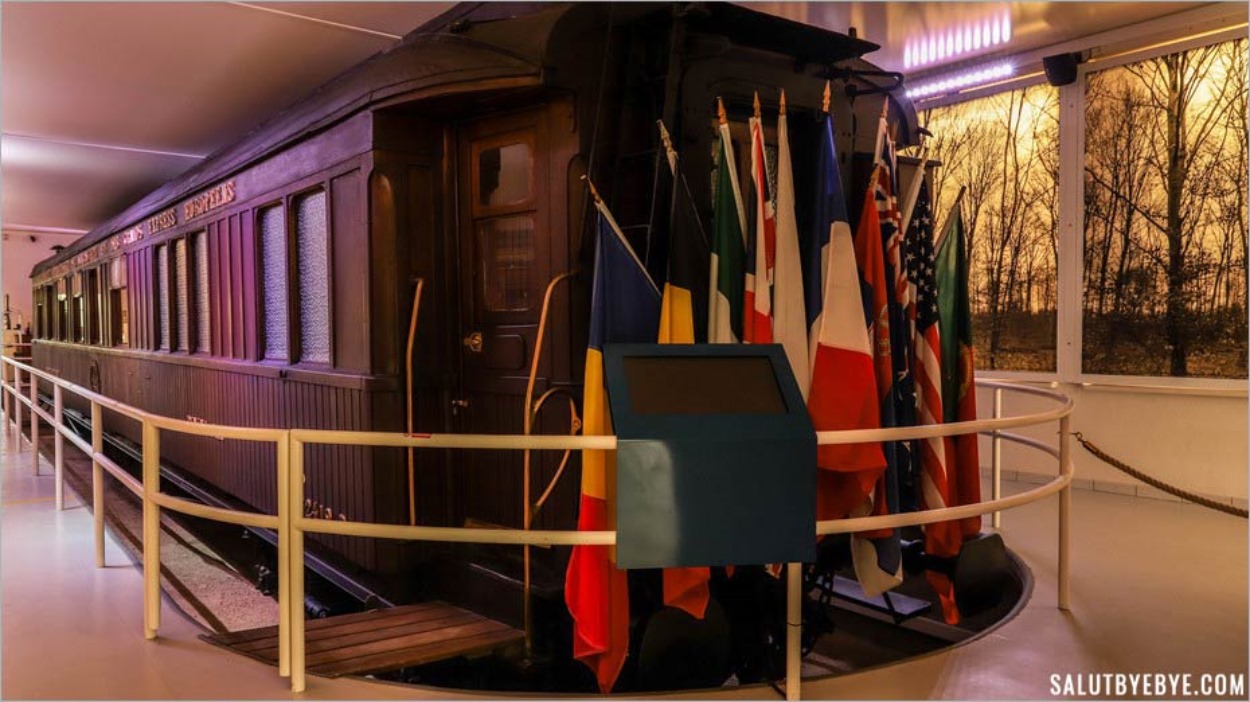 This is how the discussions with the Germans began, during the night of 10 to 11 November 1918, leading to the signing of the armistice of the First World War at around 5.15 am. It was not until 11 a.m. that the fighting ceased, the time to warn all the units on front lines. The end of the war was marked by the symbolic firing of 1200 cannon shots in Paris, and by the bells of all the churches in France ringing to announce the news.

In the museum, they explain everything about the armistice wagon in Compiegne: its history, the choice of the place, the people present that day, where they were sitting. The visit begins and ends with this very symbolic train car. 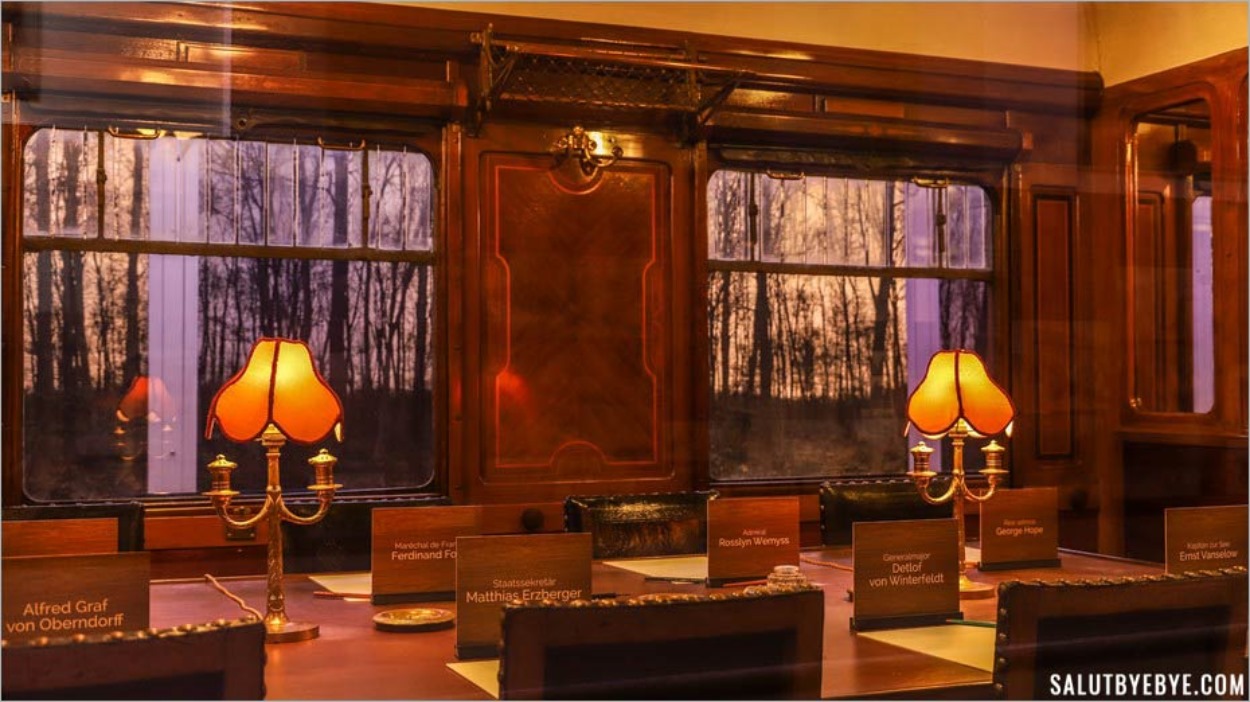 But the rest of the story must be told… because the armistice wagon you see today at the Memorial is not THE real wagon where the armistice was signed… and the Nazis had something to do with it.

The armistice clearing after 1918

You can imagine that after 4 years of world conflict which left heavy marks on French society and economy (and not only), the exact site where the end of hostilities was signed had acquired a very symbolic status.

It is known as the ‘Rethondes clearing’ and you will no doubt see this name when you enquire about the place, as it is close to the former train station of Rethondes, a small town near Compiegne in the Oise region where the railway line on which the two trains travelled passed.

A famous clearing, therefore, where several monuments were erected in 1922 as symbols of peace and tributes to the soldiers and the victims. 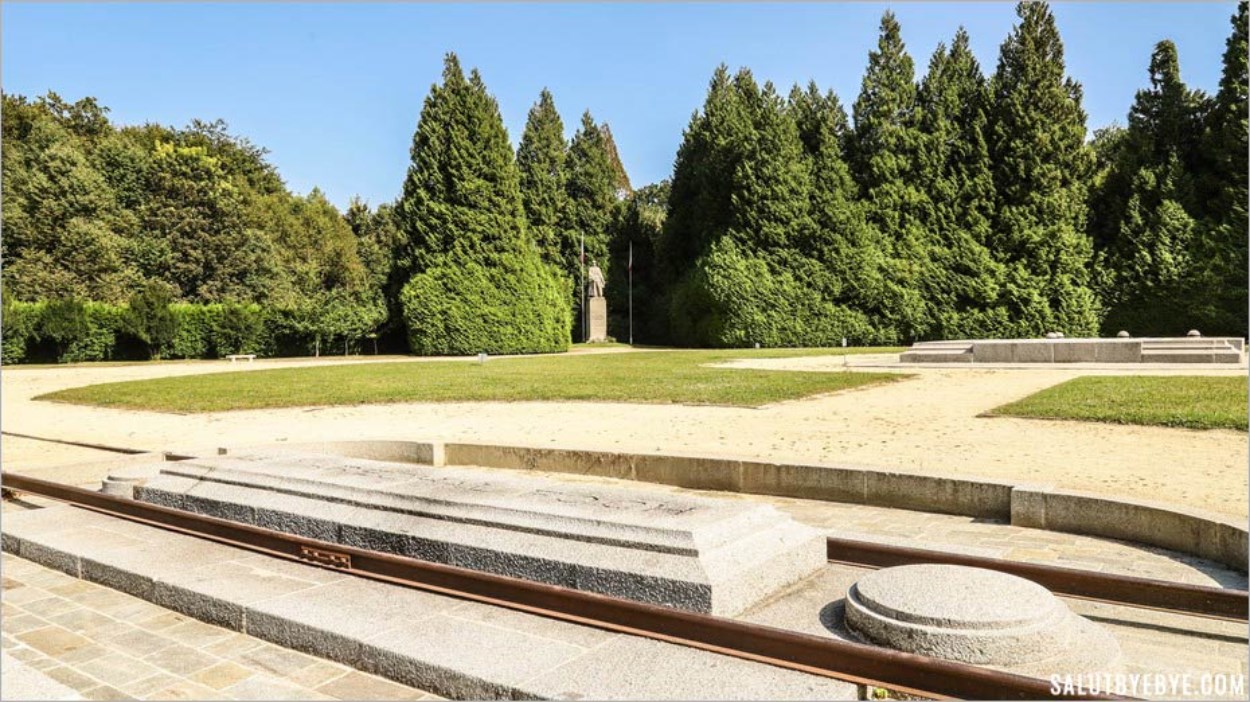 The wagon was recovered in 1919 by the Compagnie internationale des wagons-lits, which owned it… but the French government soon bought it back because of its symbolic value. It remained on display in the courtyard of the Invalides in Paris for six years, between 1921 and 1927, before being restored and returned to Compiegne, whose mayor at the time fought hard to recover this historic piece.

A building was then erected to house it, which was inaugurated in 1927.

A few years later, Europe fell under the yoke of Nazi Germany… In May 1940, the Third Reich invaded the Netherlands, Belgium, Luxembourg and France. A dazzling advance, which led France to ask for an armistice in June 1940.

The roles were reversed. Germany, defeated in 1918 and humiliated by the Treaty of Versailles, found itself in a victorious position at this stage of the Second World War. Hitler did not have the grace of Marshal Foch to organise the signing of the treaty discreetly and out of sight, quite the contrary.

He decided to humiliate the French… and what better humiliation than to force them to sign this armistice in the very train car where their victory had been recorded! The teams of the Todt organisation (“the engineers of the Third Reich”) came on the spot and demolished the wall of the museum to be able to take out the train. They went so far as to move it to the exact spot where the 1918 armistice had been signed.

Hitler came in person on 21 June, leaving the finalisation of the armistice on 22 June to General Keitel.

Shortly afterwards, to complete the humiliation of France, the Nazis recovered the wagon and sent it to Berlin… before dynamiting the monuments in the clearing, filming the whole thing. Only the statue of Foch escaped the destructive madness, giving the impression that it had remained there to contemplate the ruins.

The wagon remained in Nazi hands until the end of the Second World War and, as their defeat approached in April 1945, they finally burnt it down in the Thuringian Forest.

The one you see today in the Armistice Museum is a wagon from the same series, created in 1913 and fitted out identically. It is therefore not a mere copy but a piece of historical value.

What can you see in the Armistice Museum?

The museum was rebuilt fairly quickly after the end of the Second World War, and was enriched by several rooms that evoke the two wars and the context in which each of the armistices took place. 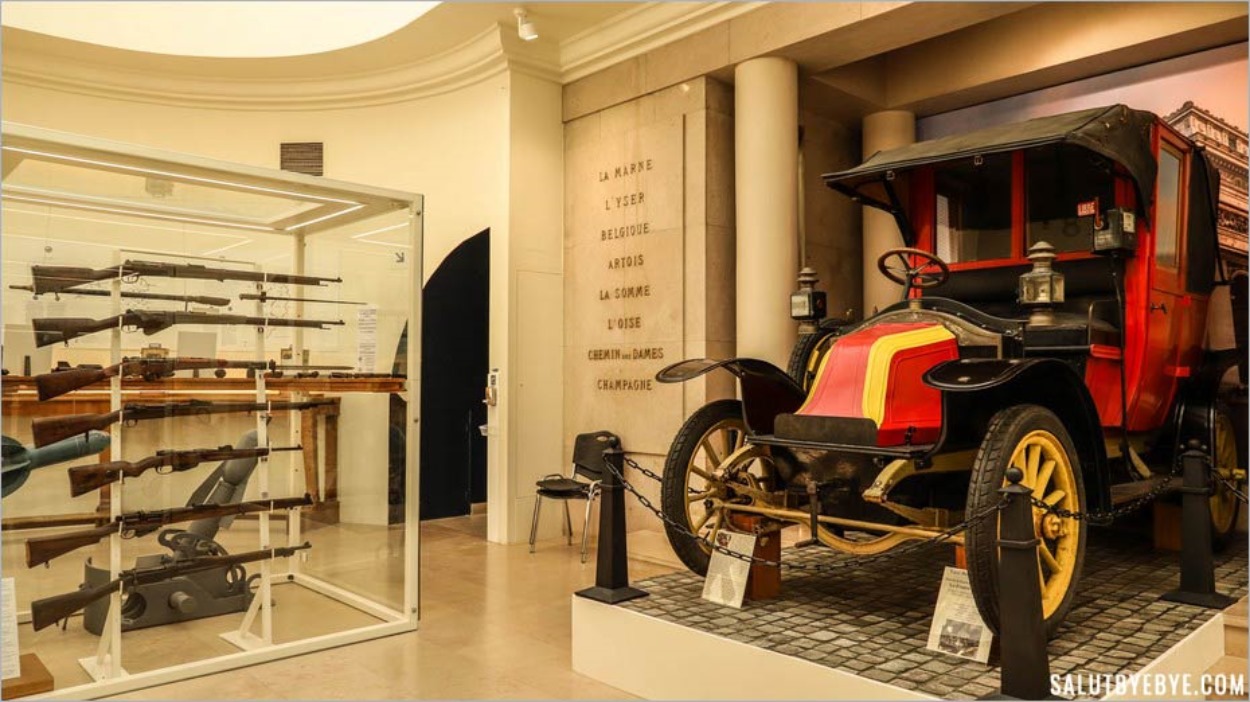 The museum also has some nice models. 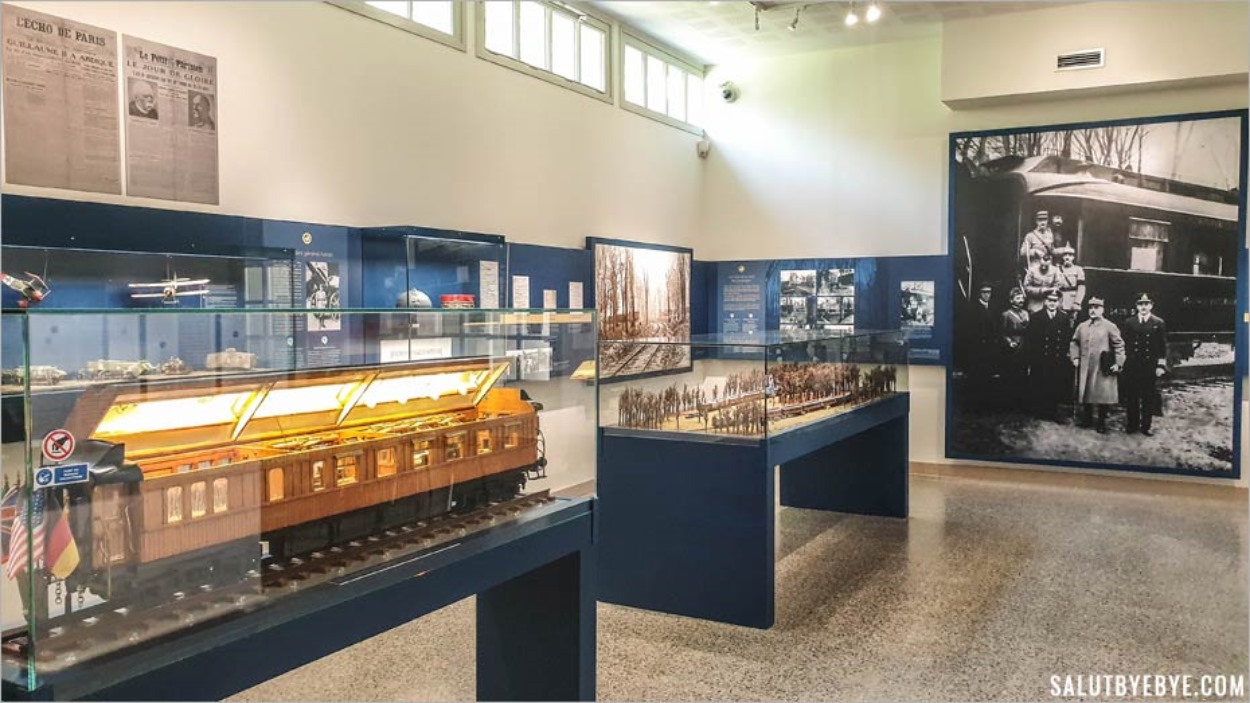 The space is bright, the circulation fluid and the explanations rich, with many very didactic panels to understand the conflicts. The museum also pays tribute to all the foreign fighters who came to fight for France.

There are toilets at the halfway point and a small shop at the end. The visit is rather quick, about 1h30, but very interesting. 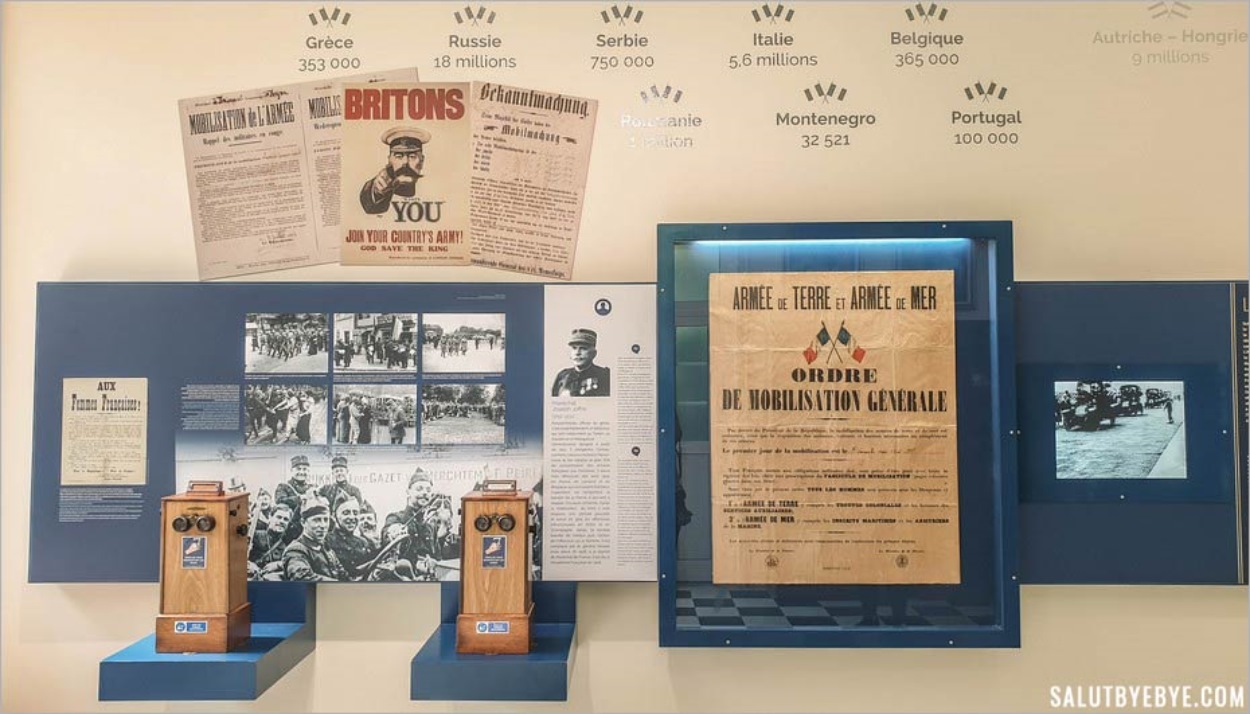 Monuments in the Rethondes clearing

The clearing itself remains quite bare. In 1918, as I have mentioned, this area was a forestry grove, so there were some large trees there. These were later cleared, creating an open oval space about 100 metres wide (328 feet), where the two railway tracks are clearly visible.

In the centre, there is a large slab bearing the inscription “Here on 11 November 1918 the criminal pride of the German Empire succumbed to defeat by the free peoples it claimed to enslave”.

At ground level, I find the reading of the place a little difficult, it would deserve a space in height to better visualize the perspective (a footbridge, a belvedere…). To give you an idea, I took the photo of the slab above by raising my arms to the maximum, it remains difficult to read and I kept the impression that the place was designed to be looked at “from above”.

The statue of Foch, created in 1937, still contemplates the place today… 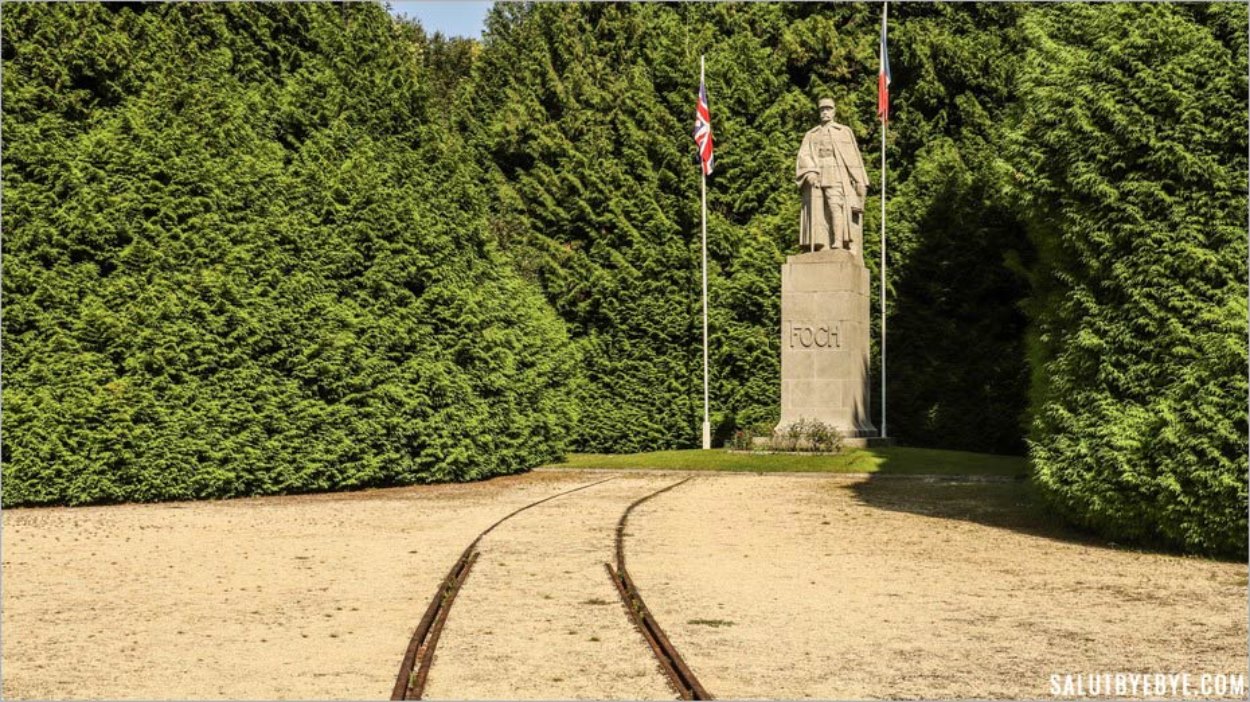 There are a variety of other monuments to peace, honouring soldiers and the dead from different conflicts, including some more recent wars. 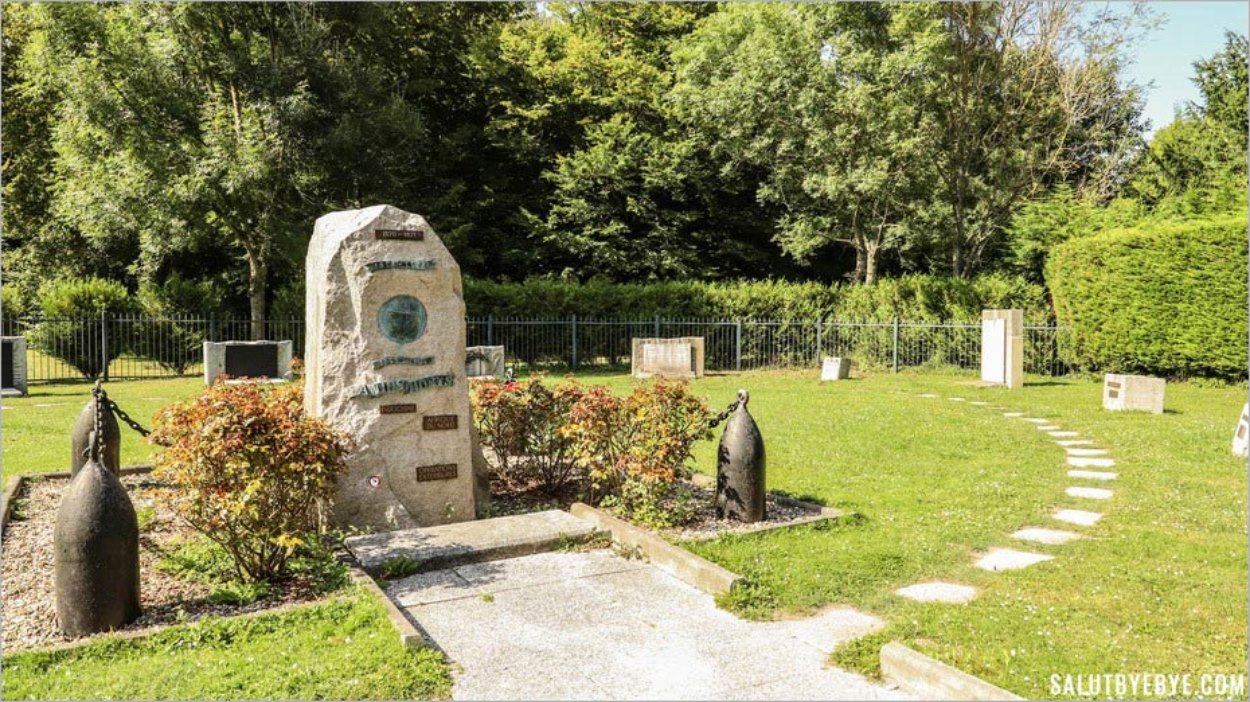 As you leave the site, you will also come across a large monument dedicated to the liberators of Alsace-Lorraine, created by Edgar Brandt (this French region once was annexed by Germany)…

Visit the armistice clearing in Compiegne

How to get there?

The Armistice Memorial is located on the “Soissons road” (route de Soissons), in the heart of the forest of Compiegne. You can get there by car from the town centre in about 10 minutes via the N31 road (GPS coordinates: N 49 42 917° E 002 90 576°) or take a taxi (official website of the Centrale des taxis de Compiègne). A large car park is available on the site.

The slightly more sporty alternative is to walk! This is the choice I made, there is a very nice walk to do passing by the Belvédère des Beaux-Monts in the middle of the forest… but it takes about 2 hours to walk (you can of course take shortcuts to go faster but it’s about 8 km one way). It is also possible to rent a bike. 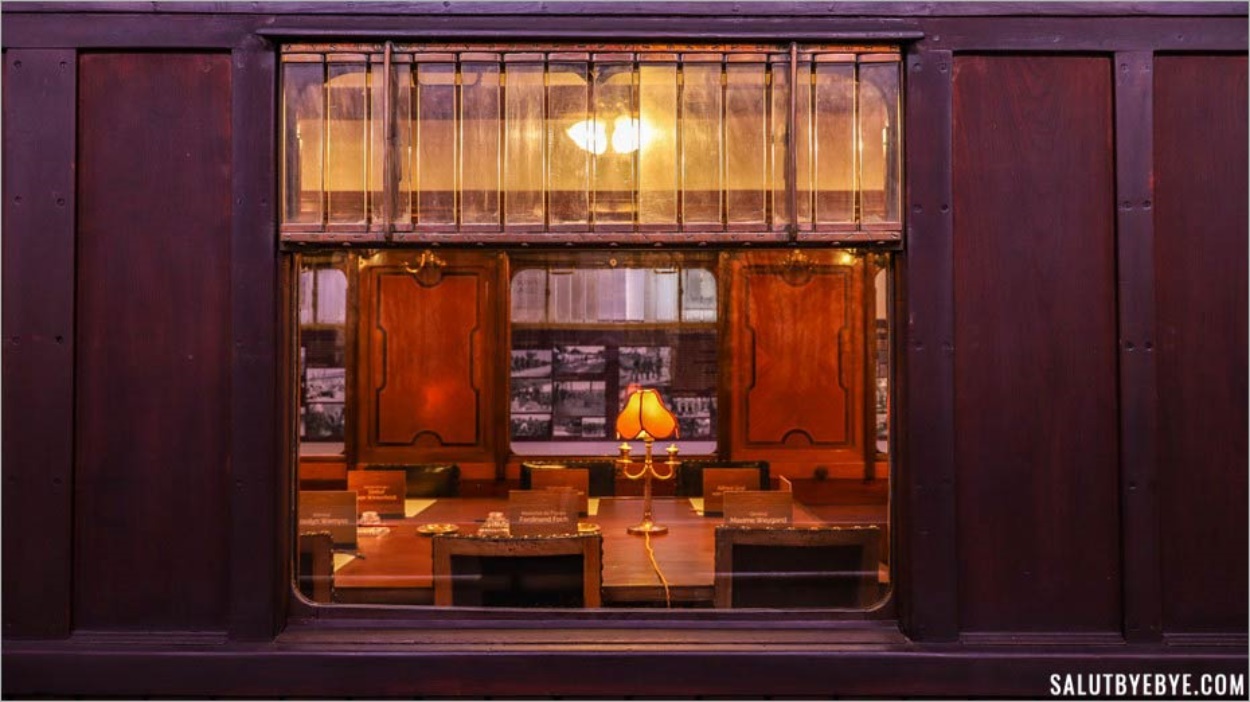 Opening hours of the armistice clearing

You can check the current ticket prices here. This is the price for access to the museum part, with the armistice wagon… but you can access the clearing freely.

It is not necessary to book in advance.

I hope that you will find this visit interesting! In Compiegne, you can also visit the Memorial of internment and deportation, installed on the site of the former camp of Royallieu, a transit camp from where the first convoy from France to Auschwitz left. A good way to learn more about the history of these troubled periods in our past while doing some sightseeing! 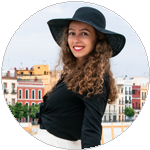